Euthanasia: Suicide Or Death With Dignity? Facing The Legal Consequences 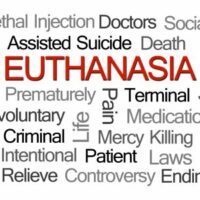 In the United States, there are only a handful of states that permit someone with a terminal illness to end their own life with the help of a physician or family member.  Florida is not one of them.  In the event a loved one is suffering through their final weeks and months in a body that is riddled with cancer or another lethal disease, to supply life-ending drugs is essentially murder.  Despite debate on this topic, the Florida legislature seems uninterested in advancing legislation to change this fact.

While there are those view modern aid-in-dying legislation across the country as a depraved contribution to suicide, others consider it humane to give terminally ill patients the right to make their own choices about when and how they die.  Only then can these patients be afforded the dignity and grace they deserve in their final days.  Unlike others who may choose to die by suicide, these individuals would prefer to live!  Since they cannot because disease has doomed them to an eventual and approaching death, some believe they should be able to end their lives in a peaceful, painless way on a timetable of their choosing.

The notorious Dr. Jack Kevorkian, known as Dr. Death, assisted over 100 patients in euthanasia, and ultimately found himself facing a second-degree murder conviction after subjecting willing patients to carbon monoxide.  It apparently allowed individuals to die within just minutes, peacefully and painlessly. Here in Florida, although patients have the legal right to refuse life-saving measures or medications with no penalties to those providing the medical services, active assistance is not legally sanctioned.  But passive voluntary euthanasia—simply refusing life-saving measures– can result in substantial discomfort.  For that reason and perhaps others, there are patients who would prefer active voluntary euthanasia—or the prospect of receiving medications, such as high doses of opioids, to speed up the dying process.  Again, although there are those who might believe such assistance is pure mercy, others view it as murder.

Felony Murder in Florida is a aggravated felony offense that is punishable by decades or even life behind bars. On the other hand, a conviction for manslaughter could lead to as many as 15 years behind bars.  Either way, one’s assistance in a terminal patient’s death could result in significant penalties.

The decision to contribute to someone’s death through euthanasia on behalf in order to ease their suffering is undoubtedly a devastatingly difficult challenge.  For those who come down on the side of assisting a terminally ill patient, there is no question about the need for a vigorous, impassioned defense.  At Salazar & Kelly Law Group, our experienced Kissimmee criminal defense lawyers are prepared to fight with everything we’ve got.  To discuss your situation, schedule a confidential consultation in our office today.