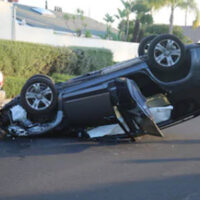 Your vehicle is meant to get you from one destination to another on four wheels.  When it flips over, the danger of serious injuries, and even fatalities, is a real and significant concern.  Here in Florida, victims of rollover collisions have suffered the terror of such accidents, but not all have lived to share their stories.

The tragedies are numerous and heartbreaking:

What Causes a Vehicle to Overturn?

While every accident is unique, certain factors tend to converge to impact the occurrence of rollover accidents.  Certainly, even the shape of a vehicle may make it more prone to such incidents, simply because the center of gravity is much higher in SUVs, vans, and trucks.  Since any such rollover is likely to have serious consequences, understanding the issues related to these incidents is worthwhile:

The consequences of rollover accidents can be devastating, often impacting innocents.  If you or a loved one has suffered the impacts of such a collision due to no fault of your own, the experienced and aggressive Kissimmee car accident attorneys at Salazar & Kelly Law Group, P.A. can help.  Contact our office today to learn of the possibilities going forward.

By Salazar & Kelly Law Group, P.A. | Posted on March 12, 2020
« Medication Errors Rampant: Is Your Loved One at Risk in a Florida Nursing Home?
Getting a Record Expunged »