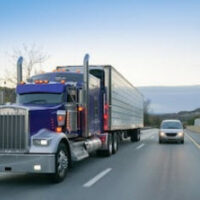 Anonymity on the road: that’s what one trucker attributes as the cause to the lack of common courtesy and civility on America’s highways these days.  Sure, no one enjoys driving in traffic that’s backed up for miles, or taking turns merging as those ever present orange cones indicate that the lane ahead is under construction.  And no one really wants to be stuck behind an 18-wheeler in heavy traffic, the view ahead blocked by the massive vehicle.  But do the frustrations drivers feel justify flipping other motorists off, tailgating, or other rude and potentially dangerous actions?  The truth is, impatience behind the wheel is always a risk, and never more than when the reckless or negligent driving occurs in the vicinity of a machine that weighs 30-40 tons (60,000 -80,000 pounds).  That’s right, tractor-trailers and other huge commercial vehicles pose particular risks on the road simply by virtue of their size.  Regrettably, all too often it is innocent commuters who pay the price for the road rage of a fellow motorist, as the domino effect of collisions unfold.  We all—including the drivers of large commercial trucks—are entitled to a safe commute.  When the impatience of a fellow motorist endangers that and it leads to significant consequences, a local personal injury attorney may be able to help.

Motorists Don’t Get it…

Truckers acknowledge that motorists typically do not understand the challenges faced by those behind the wheels of big rigs.  Notably, it takes markedly longer for a heavy commercial rig to slow down or stop than it does for a passenger vehicle.  Additionally, drivers of these vehicles have a significantly limited view of lanes on either side as traffic moves along. When forced to slam on the brakes, all kinds of unexpected consequences may evolve:

Despite the obvious dangers associated with emergency braking, driver of big rigs find themselves driving defensively every day as motorists zigzag around them, zoom ahead as drivers are instructed to merge, or brake suddenly for no apparent reason.  Yes, these driving behaviors are annoying and could result in accidents regardless of the vehicle involved.  But the potential for calamity grows exponentially when monster trucks are subjected to the recklessness.

Responding After a Collision

Has road rage that veered its head in the form of reckless driving led to significant harm to you or a loved one? Whether as a blameless trucker, or as an innocent motorist, the frustration of dealing with your injuries and losses may seem overwhelming.  But at the Salazar & Kelly Law Group, P.A., our Kissimmee truck accident attorneys are aggressive in our pursuit of justice.  Contact our Kissimmee office today to discuss your situation.  The initial consultation is free.

By Salazar & Kelly Law Group, P.A. | Posted on December 26, 2019
« Medication Errors Rampant: Is Your Loved One at Risk in a Florida Nursing Home?
Voyeurism: What is it, and What are the Legal Penalties? »