How Reliable Is Eyewitness Testimony? 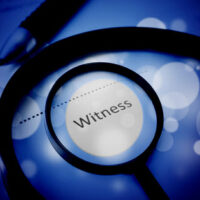 Nothing is more frightening than the prospect of facing criminal charges—except perhaps the idea of having one or more individuals lined up as eyewitnesses to testify against you.  Juries clearly put a lot of weight on such testimony, and if you’ve been ID’d, you may feel like your case is over before it’s even begun.  What you don’t realize, and what an experienced Kissimmee criminal attorney does, is that there are all kinds of issues surrounding the reliability of eyewitness testimony.  Understanding the research behind such testimony may make you feel a little better about your prospects heading into court.

The fact of the matter is, even the most upstanding citizen may not be a reliable eyewitness to a crime.  That’s because memory is adversely impacted by a number of factors.  In one study looking at memory errors and the certainty with which subjects cling to their faulty memories, subjects were allowed to read four stories about events that had occurred earlier in their lives.  One narrative, however, was entirely false, with realistic details provided by relatives of the subjects.  Astoundingly, one-third of subjects “remembered” the events of the fabricated account, despite it never having actually occurred. That’s right—these subjects truly believed they had experienced an event that was complete fiction!

In another study, researchers found that more than two-thirds of overturned criminal convictions were originally based largely on eyewitness testimony.  In roughly one-third of those cases, there were multiple eyewitnesses, all of whom misremembered and testified that an innocent person committed the crime. DNA and other evidence ultimately revealed the error of those convictions.

Why Witnesses Misremember Events at a Crime Scene

Many people view memory as a sort of video recording in the brain that replays events as they occurred in life.  In actuality, memory is more like a giant jigsaw puzzle, with pieces fitting together.  When information unrelated to the actual event is introduced into the mind, sometimes they meld with the memory of the event and seem completely real.  As witnesses are questioned, the words and tidbits supplied by the questioner may sneak into a witness’s memory as though they are part of the event.  This phenomenon, in addition to other factors, may convince a well-meaning witness that inaccurate recollections are real.  Other issues impacting memory from a crime scene may include:

At the Salazar & Kelly Law Group, P.A., our experienced criminal defense attorneys know how to challenge eyewitness testimony and make sure a jury understands just how fallible it is.  To discuss your case, schedule a confidential consultation in our Kissimmee office today.