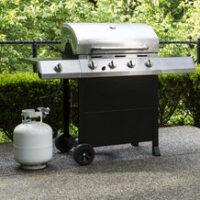 A serious and unexpected accident in Florida was a tough reminder of the potential dangers of propane. On August 13, an SUV carrying a gas grill exploded when the passenger of the vehicle lit a cigarette. The Orlando Police Department determined the gas grill was on and the propane tank was open. When the passenger lit the cigarette, the action caused an explosion which sent both the passenger and driver to the hospital with non-life-threatening injuries.

This was not the only recent accident in Florida involving propane. An accidental fire that began in the attic of a Fort Myers’ home that same weekend was fueled by a propane tank, which exploded while firefighters were fighting the blaze. Two firefighters and one resident were hospitalized due to the incident.

While it is lucky that no one lost their lives in these propone-related incidents, they are reminders that individuals can be significantly injured or killed in propane explosions and fires. Additionally, the owners responsible for the propane tanks can be held responsible for the results of a fire or explosion.

While propane is relatively safe, it is not incident-free. According to the National Fire Protection Association (NFPA), fire departments across the country responded to an average of 1,170 home fires involving propane each year between 2003 and 2007. These fires caused 34 civilian fatalities and 135 civilian injuries.

Many of these incidents can be avoided. While propane tanks are commonly used for heating homes and gas grills. When these tanks are maintained and used with care and within the manufacturer’s standards, accidents are rare. However, if an owner becomes careless or reckless with or around a propane tank, the risk of an explosion or fire increases significantly. Gas grills are the perfect example. If connected, stored, and maintained properly, gas grills can be enjoyed safely for years. However, if there are leaks in the tank or hoses, the tank is not stored properly, or the grill is left one, then only one spark could cause a dangerous explosion and fire.

Despite propane’s relative safety, the owners and users of a propane tank can carelessly or recklessly lead to an explosion. If you were hurt because of this other person’s negligent care or use of a propane tank, then you have the right to seek compensation for your physical, psychological, and financial injuries, including:

You do not have to suffer in silence after a propane accident that was caused by someone else’s negligence. You have the right to work with an attorney who can thoroughly investigate what happened, gather evidence on your behalf, and pursue the compensation you deserve under the law.

For more information, contact the dedicated personal injury attorneys at Salazar & Kelly Law Group, P.A. at 407-483-0500 to schedule an initial consultation. Our Kissimmee legal team is eager to assist you today.