Vandalism Charges can be Serious 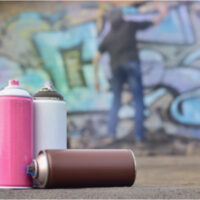 Ponce de Leon has been vandalized.  His statue, that is.  Red paint and graffiti adorned the figure in Melbourne Beach, and it is one of multiple statues that has been targeted recently. Protests against the glorification of historical figures who allegedly had inhumanity woven into their character have taken a hard turn toward defacing public property of late, and, as satisfying as the action may be in the moment, committing crimes does generally result in penalties.

It may not seem like a big deal, and it’s not, comparatively speaking.  Nonetheless, if you vandalize property, you are costing business owners and/or taxpayers a chunk of change.  Known as criminal mischief, law enforcement takes this very seriously, and, if convicted, you could face some pretty hefty fines, and even time behind bars in some cases.

Vandalism is basically the intentional, malicious destruction of someone else’s property according to Florida statute 806.13.  In some cases, it is merely tagging, or spreading graffiti, which requires some cleanup, but doesn’t necessarily interfere with much else.  This would likely result in misdemeanor charges. Still, the penalties could result in a $500 fine and a couple of months in jail, and that’s if the damage was under $200.  For more costly damage, the fine jumps to as much as $1,000 and a full year behind bars. If the damage caused more than $1,000 in damage, you’re looking at $5,000 in fines and as much as five years imprisonment. And consider this:  some forms of vandalism that might interrupt business or utility services, communications, or transportation, could result  in felony charges.  And, in the worst-case scenario, you could face third degree felony charges for defacing a place of worship such as a mosque, synagogue, or church.  That could mean years in jail and thousands of dollars in fines.

Other Facts Worth Knowing

Regardless of the level of criminal mischief, repeat offenders will experience escalating fines.  Minors who are convicted of such crimes may also have their driver’s license revoked, suspended, or withheld until appropriate community service hours are served.  The court may also instruct the Department of Highway Safety and Motor Vehicles to withhold a teen’s driver’s license for up to one year beyond typical eligibility if the vandal is not yet old enough to be issued such a license.

Your experienced Kissimmee criminal defense team will examine a number of possible defenses in order to achieve the best possible outcomes for you.  The prosecutor will have to prove that the damage was caused willfully, not accidentally, that your conduct was responsible for the damage, and that extenuating circumstances or legal justifications for your actions are without merit.  At Salazar & Kelly Law Group, P.A., you can count on an aggressive and sure-footed defense.  Contact our Kissimmee criminal attorneys today for a free, confidential consultation.

By Salazar & Kelly Law Group, P.A. | Posted on August 19, 2020
« Avoiding Road Rage Incidents
Can You Sue Your Employer Over a Construction Site Injury? »