If You’ve Been in a Rear-End Collision 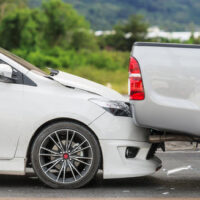 There are over 1.7 million rear-end crashes across America annually. Nearly one-third of them result in injuries, in addition to the fatalities that are a consequence in thousands of instances.  If you have been the victim of a serious rear-end collision and don’t know what to do next, a Kissimmee car accident attorney may be worth consulting.

Even at low speeds, the injuries associated with rear-end collisions can be severe, and include:

The most common injury that occurs following a rear end collision is whiplash.  It can be a particularly devastating condition that may not be symptomatic until days or weeks after an accident. Then the crippling effects may last for weeks, months or years. Symptoms may include:

Undeniably, the number one cause of rear-end collisions is distracted driving. What may be somewhat startling to drivers is that eating and drinking are the most commonly cited distractions involved in these incidents. Other common distractions include:

Researchers note that in many cases, drivers involved in rear-end collisions were simply daydreaming, and even though their eyes were on the road, their mind wasn’t, resulting in delayed reactions.

Unfortunately, other factors that contribute to these types of collisions include driver errors such as fatigued or impaired driving. And in some cases, road rage or aggressive driving play a role.

Studies conclude that the majority of these collisions occur on straight roadways with no or few intersections or stops. Clearly, drivers are less likely to expect a vehicle to stop under these circumstances, and are caught off guard. While following too closely in heavy traffic is not always cited in such collisions, it is worth noting that recommendations to follow at least one car length behind another vehicle for every 10 miles per hour of speed are a good rule of thumb.

The majority of rear-end crashes, in fact, involve forward vehicles that are at a complete stop at the time of impact. Drivers in most cases were traveling during daylight hours, on dry roadways, and at low speeds.

If you’ve been in a crash through no fault of your own, and are suffering serious health impacts, it can be frustrating and maddening.  But you are not alone. At the Salazar & Kelly Law Group, P.A., our experienced personal injury team deals with cases just like this every day. Contact our Kissimmee office today for a confidential consultation related to your situation today.