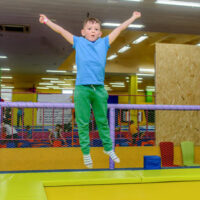 When one woman took her toddler son to a trampoline park in Miami for an afternoon of indoor giggles, she had no idea of the serious health impacts her son would suffer. Despite the park promoting trampolines as a safe, fun activity for toddlers, the American Academy of Orthopedic Surgeons (AAOS) warns that children under age six should stay away. But the family was unaware of the AAOS warnings, and their three-year-old wound up in a body cast as a result of the repetitive bouncing.

Trampoline-related injuries have sent children to emergency rooms at alarming rates.   And those injuries are on the rise. One study from 2010-2014 notes an increase by a factor of ten during that four-year period. Here are some startling facts about trampoline risks:

Trampoline Parks are Notorious for Injuries

Between 2016-2018, nearly 300 calls to 911 were made related to falls and injuries in South Florida alone. They included an array of serious issues, including:

Trampoline parks generally have rules posted to ensure a safe experience. Yet one investigation found that the rules were often not enforced, and teens pushed limits by performing precarious flips and double bouncing.

If parents take their children to trampoline parks, don’t they know of the inherent risks? Whether or not they do, park operators say they should, especially since they sign waivers relieving parks of liability in the event of injuries.

On the other hand, if a company is negligent, shouldn’t they be held accountable? The fact of the matter is, fighting against a trampoline park after signing a waiver can pose some challenges. Nonetheless, some waivers are simply unenforceable. Depending on the circumstances, the park may be held liable for damages related to the injuries sustained on the premises. Examples of negligence that might lead to their liability include:

It is critical to note that personal injury claims must be filed within four years of the accident under Florida law. Additionally, damages in these cases may be based on the percentage of blame assigned to each party. To pursue your claim for justice following a trampoline park accident, contact the creative, experienced legal team at the Salazar & Kelly Law Group, P.A. in Kissimmee, Orlando, or Altamonte Springs.